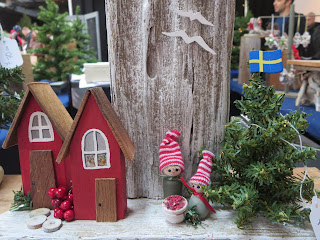 I’ve got a short list of holiday fairs or Christmas Markets that I’d like to check out in the next few weeks. True to my interest in international travel, the first event that I attended this weekend was the Swedish Christmas Fair.

I had been to Sweden before and have fond memories of the country and its people. So far Stockholm was the only city where I stayed in a quirky youth hostel which lies in a docked ship, overlooking the Gamla Stan (Old Town) and the Royal Palace. My fun-filled visit to Stockholm deserves a retrospective post some day...

It was an enjoyable afternoon at the Swedish Christmas Fair where I learned new information and captured some of the fair activities in the following pictures.

1) St Lucia, born in Italy, died a martyr's death and was declared a saint in 303 AD. St Lucia is the symbol of light during the darkest season of the year. Lucia celebrations are one of the foremost cultural traditions in Sweden. On December 13, Swedish families, schools, and the workplace celebrate Lucia by singing traditional songs like Santa Lucia. The Lucia Pageant with young carolers dressed in white, holding candle lights while singing traditional Swedish Christmas carols,  were lovely.

2) The Swedish folk dancing performance accompanied by music was lively, with many quick steps, and move co-ordinations among the performers. It reminded me that dancing is an excellent way to stay in shape. 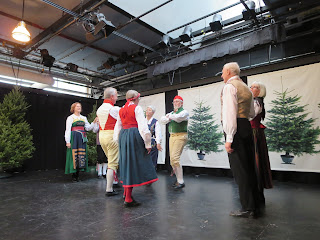 3) The Sami art and cultural exhibition was informative. I learned that the Sami are an indigenous people of the Arctic. They live in an area called Sápmi that stretches from the Kola Peninsula in Russia through Northern Finland, Sweden, and Norway. According to the Norwegian Sami Parliament, there are about 100,000 Sami, and Norway is the country with the highest number of people considering themselves Sami. Different Sami groups are defined by their traditional source of livelihood and geographical location (e.g. The Mountain Sami, The Sea Sami). The Sami national day, common for all Sami, is on February 6. The date was chosen to commemorate the first Sami National Conference held in Trondheim, Norway in 1917. The Sami language is related to Finnish, and can be divided into several main dialects. Six of these have their own written form.


4) The Swedish Christmas Market featured high quality Swedish art and craft, charming traditional Swedish Christmas decorations, and imported Swedish products such as Lingoberry jam, Knäckebröd (Crispbread) which has been baked in Sweden for 500 years and can be topped with just about anything, from plain butter to caviar.

I love the multiculturalism in my city that enables me to experience the Swedish Christmas Fair, and brings back fun memories of my travel to far away places such as Sweden.

What fun activities did you enjoy this weekend? Please share below.