Greetings! This is my second monthly wrap-up in 2019. My January wrap-up was posted here. I plan to write a wrap-up for each month so I can look back and see how well the year has turned out.

I wrote about my visit to the Icefest 2019 event here. The Ice Breakers blog draft is in progress. Each of the two indoor art exhibits had about thirty or more beautiful paintings. Taking photos without flash was allowed so I took several photos and might share some of them in another blog post. In the interim, I included two photos below.

Omar Ba is an artist born in Dakar, Senegal. He lives and works between Dakar and Geneva. His works have been shown in Belgium, Switzerland, the UK, and Senegal.


Shuvinai Ashoona lives in Kinngait (formerly known as Cape Dorset) on the southern tip of Baffin Island in Nunavut, Canada. Her work has been shown in various galleries and museums in Canadian cities.

In February I blogged about my travels to explore some of the main attractions in Guatemala, my fit and fun walk to see Icefest Hollywood North ice sculptures and ice carving demonstrations, one monthly wrap-up for January, and one final update for my Winter Fun List.

I read seven books written by authors from Australia, Canada, the UK, and the USA. I was kind of surprised that I could finish this many books in a short month like February. 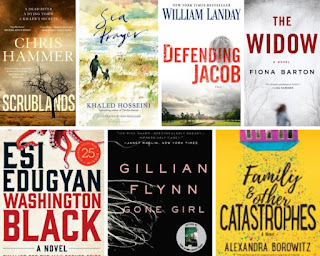 I attended two piano concerts performed by Rudin Lengo and Jean-Luc Therrien, one guitar concert by Louis Lawlor, and one choir and organ concert by Bach Children's Chorus at Roy Thomson Hall. The live singing and music were simply incredible.

Sharing delicious food with my family and friends was the theme in February. Each week we had a food event: A potluck dinner with my family clan, followed by a potluck lunch with my yoga class, and a Mexican fiesta dinner on Family Day. There were desserts at each event, too. I also met up with my friends for three coffee and one lunch catch-ups. One of my friends is taking early retirement in March so it's an exciting time for her.

Being at home the entire February means I can be consistent with my fitness routine. I got in all my daily meditation time, and walked outdoors for forty-five minutes or more every day, except three Sundays which were my rest days. I also completed thirteen strength workouts in the gym, eight yoga classes, and four swimming sessions.

I continued my French an Spanish lessons on Duolingo, fifteen minutes for each language daily. I also learned about the new artists when I went to see their art exhibits or attend their concerts, and new authors when I read books that are new-to-me. I usually end up researching more about the artist or the author and their works.

I watched four movies in February. As we know by now Bohemian Rhapsody won four Oscars for Best Actor, Film Editing, Sound Mixing, and Sound Editing, and Shallow from A Star Is Born won an Oscar in the Original Song category.

My sister and I booked a guided tour to Croatia, Bosnia, and Slovenia in March.  We're both looking forward to the trip. The weather forecast at our destinations definitely looks more spring-like than what we have at home at the moment.

Overall, February was a fun-filled month for me. I enjoyed time with my family and friends, and the continuity of my health and leisure activities. March is off to a great start with plenty of new things for me to explore and learn.

How was your February? What good things happened? I'd love to hear your comments.