Day of the Dead festival

I was at the 14th edition of Day of the Dead/ Dia de los Muertos festival at Harbourfront Centre this weekend. Day of the Dead is a celebration of the life of the deceased people, their memories, their achievements, and their impact on the coming generations. This year’s festival edition is dedicated in honor of the victims of the earthquakes in September 2017 in Mexico.

The festival showcased a number of contemporary and traditional ofrendas. By talking to the ofrenda organizers, I learned that in 2003 the Mexican Day of the Dead is recognized by UNESCO as Intangible Cultural Heritage. I also learned about the various elements of La ofrenda and their meanings:
Below are pictures of some of the ofrendas on display at the festival.

1. Homage to the celebration of Day of the Dead in Lake Patzcuaro by Edgar Alejandre Perez:

"Janitzio Island, in the middle of Lake Patzcuaro, is the site of one of Mexico’s most celebrated Night of the Dead observances. Legend has it that the “veil between darkness and light” is the thinnest around this island. Each year on November 1st, the islanders and their neighbours take to their boats to enact the candlelight ritual enhanced by the flames reflected in the water, the boats laden with flowers, and the boaters chanting."

2. This ofrenda represents the lake region in Michoacan where the tradition of waiting for spirits of the departed include flowers, corn, fire (candles), food, water, incense (Copal) and are key elements that will feed the soul of those who have passed away for a whole year. 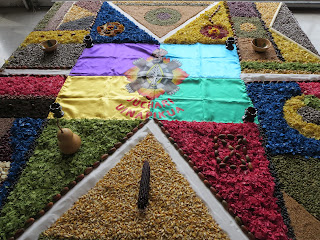 3. Large ofrendas are made in houses of the departed where the community visits with offerings of bread, fruits and candles. Visitors are also fed with foods made from corn. 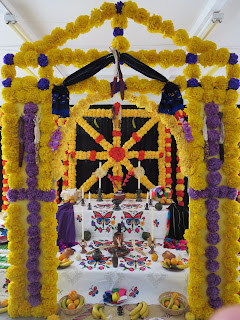 4. The ofrenda below by Ilyana Martinez, is made up of many niches or nichos, to create a whole. With paint, paper, and cardboard the artist alludes to some of the artisanal traditions of handmade objects in Mexico: papel picado (colourful tissue paper banners which have been cut out and punched with shapes, figures, or letters), and cartoneria (objects made with cardboard or paper mache).


5. The ofrenda below by EXATEC Ontario is dedicated to the earthquake victims of Mexico:


The market at the festival featured Mexican vendors offering unique jewelry, home décor, crafts, clothing, Day of the Dead items and treats such as the edible skulls made from sugar, known as calaveras, and Bread of the Dead (Pan de Muertos) which I was told is orange-flavoured.

There were Mexican cooking sessions held by some of the most exemplary cooks in Mexico, as well as Mexico's traditional music played by Mariachi Azteca, one of Toronto’s pioneer mariachi bands.

By attending the festival, I've learned a lot about the Day of the Dead celebration.

I’m dedicating this blog post to my dear friend, Thekla, who died too young. I miss you and our friendship very much. On this day, I celebrate your life, your achievements, and your legacy.
Posted by Natalie at 09:00