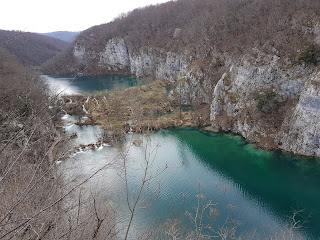 Greetings! After our adventures along Croatia's delightful Dalmatian Coast, my sister and I continued with our tour to visit Croatia's Plitvice Lakes National Park and three towns on Croatia's Istria Peninsula (Opatija, Rovinj, and Pula).

Plitvice Lakes National Park is the oldest and largest national park in Croatia. It was designated as a national park in 1949, and as a UNESCO World Heritage Site in 1979. The park is famous for its sixteen turquoise-coloured lakes and numerous smaller lakes, separated by travertine barriers.


On the day of our visit to Plitvice Lakes National Park, we woke up to an overcast sky and a dusting of fresh snow which melted as the temperature rose. I had read about the Plitvice Lakes and was excited to explore this magnificent natural wonder.

Our tour guide got tickets for the group and walked us through various sections in the park. The park entrance ticket includes a 20-minute ride with the electric boat and a panoramic train as the park is a large area to discover. Raised wooden footpaths zigzag and curve to lead us through this natural beauty.

The views were spectacular no matter where we looked. The sixteen lakes terrace their way down a hillside, each one connected to the last via cascading waterfalls, caves, springs, and chutes. The highest falls, Veliki Slap, the tallest waterfall in Croatia, tumble some 78m. Altogether, the string of lakes is almost eight km (five miles) long.


There are four hiking trails, three caves, and a special beech-fir forest reserve for visitors to explore. I truly enjoyed our visit to Plitvice Lakes National Park. On a sunny day, or in the Fall, I imagine the park and colours of the lakes must be quite stunning.

Opatija is about two hours drive north west of Plitvice Lakes. It's a charming town located on Croatia's Istria Peninsula, along Adriatic shores near the tip of the Gulf of Kvarner. Opatija has a fascinating cultural blend, Austro-Hungarian, Italian, Yugoslavian, and Croatian, over the centuries. With its close proximity to Italy, many Italians come here for rest and relaxation.

During our stay in Opatija, the sunny skies and warm temperatures returned. We strolled along Opatija's seaside promenade, the Lungo Mare, and soaked in the small city’s ambiance and lovely setting.


Some of Opatija's landmarks include the Maiden with the Seagull statue, the Boatman statue by the small harbour, Kvarner hotel, and the gardens.

From Opatija, we took a day trip to Rovinj, located about an hour drive south west of Opatija. Rovinj delighted us with its stunning sea views, Venetian architecture, and cobbled streets.


It was a pleasure to walk and wander the small alleys in and around Rovinj. The houses all seem to exude charms and present numerous photo opportunities.


For a panoramic ocean view, we climbed the stone steps leading to Rovinj's church and walked the pebbled grounds before going towards the market. The local specialities include truffles, sauces, fruit jams and herbs such as lavender.

From Rovinj, we took a side trip to Pula, about 40 minute drive south of Rovinj. Walking towards Pula's centre, we were delighted to see Pula's remarkably well-preserved Roman amphitheater (or arena), where performances are still held today. It is the 6th largest amphitheater in Europe.


Without any tourist crowd, we were able to spend some time walking around the Roman arena and examining its structure in details. We could see the Adriatic sea through the arena's openings.


Further wanderings let us see more of Pula's interesting and historic landmarks such as the four shown in the photo below the Cathedral (top left), Temple of Augustus (top right), Town Hall (lower right) and Twin Gate (lower left).


Our time in Croatia's Plitvice Lakes National Park, Opatija, Rovinj, and Pula was truly amazing. I hope this post and my selected photos reflect the beauty of these places in Croatia. I plan to have one more post on Zagreb.

Thank you for travelling with me. I'd love to hear your comments.