Flying from Toronto to Buenos Aires, with a stop over in Washington DC, I arrived at Argentina’s main international airport Ezeiza Ministro Pistarini (airport code EZE) around 1:30 AM local time. The airport is about 42 km (26 miles) to the west of Buenos Aires. After going through immigration, I went to TaxiEzeiza, the official taxi booth, to get a cab to my hotel. Great thing about arriving so early in the morning in a big city is there is no traffic! I rolled down the window to feel the nice, cool air. November is spring time here. The ride from the airport to my hotel took about 35 minutes. Check in at hotel Ibis was quick. I got a basic, clean and quiet room. Then it was time to rest after a long flight.

After five hours of sleep and a nice shower, I felt refreshed. My room rate included breakfast which was served on the main floor. There were hot and cold food and beverage choices, as well as fresh fruits. The hot coffee was most welcoming!

I chose hotel Ibis Buenos Aires Congreso for its central location. Even though the subway line was close by, I didn’t need to use it. I walked for a few hours to explore the historical centre of Buenos Aires. It’s a great walking city. I had no trouble navigating the main streets, from Congreso to Plaza de Mayo. The weather was sunny with high 25C (75F).  Some pictures from my walk are below. Click to enlarge them.

Having a cafe con leche and three medialunas at the historic Cafe Tortoni was a great pleasure.
A map of Cafe Tortoni and Argentine Tango Academy: 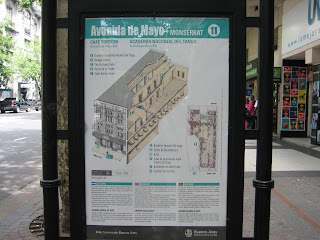 DAY 2 - Recoleta and a Tango Show

It was sunny this morning, with high around 27C. The weather forecast called for rain in the afternoon. After breakfast at the hotel, I walked about four hours to explore Recoleta area of Buenos Aires.

Recoleta is an affluent neighbourhood with lovely homes. I viewed an art exhibit at the Centro Cultural Recoleta, browsed beautiful shops along Avenida Alvear and visited Recoleta Cemetery, the resting place of Eva Peron (Evita), the former First Lady of Argentina. The cemetery has many elaborate tombs.

Pictures of some of the architecturally beautiful buildings I passed by on this walk are below. Click to enlarge them.


A coffee break at Cafe La Biela, another historic cafe in the city, was enjoyable.


I walked back to my hotel, had lunch and stayed in to catch up on email while it rained outside.
In the evening, I went to the hotel front desk to book a last minute Tango show with Senor Tango.The tour cost about $20 Canadian, including hotel pick up and drop off. I didn’t know what to expect. Turned out it was a fantastic show with non stop dancing, singing, from 10:30 pm to 1:30 am! I was glad I got some rest when it rained earlier in the day, otherwise I would not be able to stay up that long.

The auditorium was large and had a few hundred people in attendance. The show started with two real horses on the stage, about 14 to 20 dancers taking turn to perform, an orchestra, two main singers, two back-up singers who looked like twins, and ended with the song Evita, the flags of Argentina came down in the centre stage and confetti. I lucked out, sitting about five steps from the stage and the orchestra so it was real close up.
One tip: If you’re coming to the show with a tour bus, note the bus number and the driver’s name before you get off so that when you leave the show, you’ll find the right bus to get back to your hotel. There were a lot of buses waiting outside when the show ended.

After breakfast I walked to San Telmo, the oldest neighbourhood in Buenos Aires, and spent a couple of hours exploring. The cobblestoned streets and beautiful building architecture in San Telmo made the walk very rewarding. San Telmo is well known for its antique fair on Sunday from about 10 AM to 4 PM so if you’re in the city on Sunday, go to the fair. If you can’t make it to San Telmo on a Sunday, it’s still fun to stroll along Calle Defensa, or walk around Plaza Dorrego.

A coffee break at Cafe Dorrego was another enjoyable moment. I really like the old coffee shops in Buenos Aires.

In the afternoon, I walked to Calle Florida area. It’s a more modern, pedestrian area, lined with shops and restaurants. It was fun to do window shopping and people watching here. I didn’t buy anything though as I still had another six days in Argentina.

Have you been to Buenos Aires? I'd love to hear from you. Please take the time to leave a comment.

Coming up: Iguazu Falls and Bariloche.