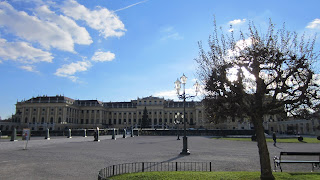 Greetings! This post is the second of four posts inspired by my trip to Central Europe last November. My sister and I visited Budapest, Vienna, Bratislava, and Prague. I wrote about our stay in Budapest here. I had been to Vienna with my friends before. This time it was lovely to re-visit Vienna and create new memories with my sister. I hope you enjoy my trip highlights and the selected pictures below.

After a satisfying breakfast, we left Hungary and travelled through the Austrian countryside to Vienna, former centre of the Habsburg Empire, and the capital city of Austria. With the Communist regime ended in Hungary in 1989, and both Austria and Hungary are in the European Union, there is no longer any border control between the two countries.


Upon arrival in Vienna, we got off our modern coach for a short walk break and a quick snack. Michael, our tour manager, recommended the locally well-known Bitzinger Wurstelstand Albertina hot dog stand. My sister and I shared a hot Viennese sausage, cut up in bite sized pieces, served with mustard and rye bread. It was so tasty!


Next, we walked over to Kärnterstrasse, the main pedestrian-only shopping street of Vienna. The shops were beautifully decorated for the Christmas holidays. We window shopped until it was time to board our coach to go to Schönbrunn Palace for our scheduled guided tour. 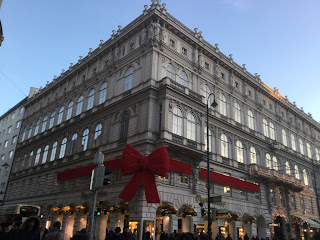 Schönbrunn Palace was the baroque summer palace of the Habsburgs. Built between 1696 and 1730, it contains a staggering 1,441 rooms. Empress Maria Theresa and her sixteen children left the greatest impact on the palace. 2017 marked the 300th anniversary of Empress Maria Theresa's birth. One of her daughters is Marie Antoinette who was the last Queen of France before the French Revolution. Franz Josef I, who was born in the palace and reigned for 68 years, was the last Austrian emperor to live here. The greatest attraction are the stunning State Apartments, followed by the Gloriette, a marble summerhouse, and the palace's Imperial Gardens.


After touring Schönbrunn Palace, we were dropped off at our nearby hotel. We checked in our comfortable room, rested a bit before heading out for dinner at Schonbrunner Stockl restaurant that our tour manager had recommended. I had the classic Viennese Tafelspitz served with creamed spinach, apple horseradish, and shredded potatoes, with local wine. It was an excellent meal. Sleep came easy after a wonderful touring day.

Today we took a tram ride around the entire Ringstrasse or circle of boulevards that enclose the old city of Vienna. The tram follows the route of the medieval fortifications. We passed by several landmarks, historical monuments, museums, beautiful buildings, and even graffiti walls. It was a relaxing and inexpensive way to view the city.


I was interested in taking a guided tour of Staatsoper, Austria's State Opera House. This French Renaissance-style building, with its elegant arcades, is right along the Ringstrasse. It was built in 1861-1869, and rebuilt in 1946-1955 to plans.


The queue for the guided tour at the Opera House was long so we decided to visit Domkirche St. Stephan or St. Stephen's Cathedral, the symbol of Vienna. Construction of St. Stephen's Cathedral commenced in the 12th century. Today, it is one of the most important Gothic structures in Austria. The cathedral is 107.2 meters long and 34.2 meters wide. It has four towers. The tallest of these is the south tower at 136.44 meters.


Feeling energetic, we bought our tickets and climbed the south tower with its 343 spiral steps to the Watchman's Chamber for the panoramic views of Vienna. On the roof of St. Stephen's Cathedral, colourful roof tiles were laid to create the Royal and Imperial double-headed eagle and the coat of arms of the city of Vienna.


After returning to the ground, we did gift shopping for our families. The Christmas Market outside St. Stephen's Cathedral was getting set up. I imagined it would be very busy and festive here in the next few weeks.

We took the subway train back to our hotel. For dinner, we went to Strasser Brau, a local restaurant recommended by our tour manager. Both of us ordered the Wiener Schnitzel, another traditional Viennese dish, with wine. When the orders arrived, we had a good laugh as the portions were big enough to feed four people.


I'm grateful for the opportunity to visit Vienna again. It is a grand city with so much history and culture to offer. I'd highly recommend Vienna to other travellers.