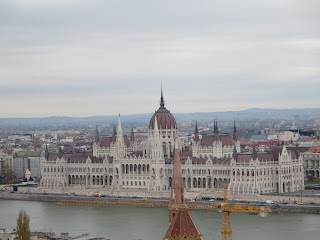 Greetings! Last November, my sister and I took an 8-day escorted tour to Central Europe. I wrote about our itinerary here. I'm now writing four individual posts on Budapest, Vienna, Bratislava, and Prague. This post is the first of four. I hope you enjoy my trip highlights and the pictures as much as we've enjoyed our trip. 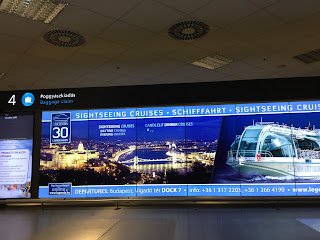 Below is a view of Budapest at night, outside our hotel. Note the tram, bus, bikes, and snow flake light displays as we were there about six weeks before Christmas. There is also a Metro (subway) entrance close by. Budapest has a well-established public transit system. 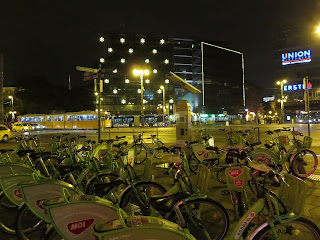 In the evening, we met Michael, our tour manager, and nineteen fellow travellers (one from Australia and eighteen from the USA) at one of the restaurants in the hotel for our orientation meeting. Our group seemed friendly and courteous. We looked forward to having a fun week with them. We enjoyed a Welcome drink (champagne for me!) and a three-course dinner. My first dessert on the trip was a crème brulée served with three scrumptious cookies. 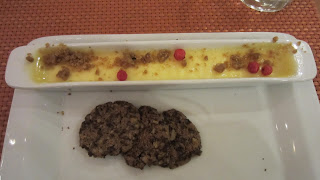 DAY 3, Monday November 13 - Budapest City Tour, Great Market Hall, and Gellért Thermal Baths
We had a great buffet breakfast in the hotel, with plenty of hot and cold choices but the most unique is the delicious Hungarian goulash soup. 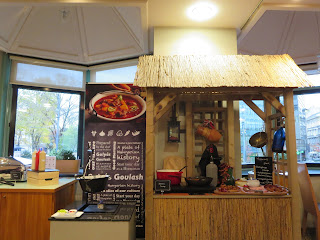 Next, we boarded our modern coach to take the morning city tour of Budapest. Budapest is the capital city of Hungary that straddles the Danube river, with the Buda Hills to the west and Pest to the east. We began in Pest and continued up the majestic Andrassy Boulevard toward Heroes' Square. This is Pest's greatest boulevard. It is lined with trees, museums, restaurants, and beautiful apartment buildings. It is a reminder that this city was once part of the Austro-Hungarian empire. Heroes' Square was created for the millennium in 1896, which celebrates the arrival of the Magyar tribes in the Carpathian Basin in 896. The statues represent the chronology of some 1,000 years of Hungarian history.

Leaving Heroes' Square, we passed by the Great Market Hall before crossing the Danube to the Buda Hills. Castle Hill, a UNESCO World Cultural Heritage site, consists of two parts: the Royal Palace itself and the so-called Castle District. Most of this area is a reconstructed medieval city. The original castle was destroyed in World War II and replaced with the current Buda Castle. This is an interesting area for walking and wandering. There, we saw the Buda Castle and Matthias church.

We continued to the Fisherman's Bastion for fantastic panoramic views of the city, including the Hungarian Parliament and impressive St. Stephen's Basilica, the largest church in Budapest.


Budapest's exquisite Parliament building is the second largest in Europe after England's Westminster. The main facade faces the Danube. Designed by Imre Steindl and completed in 1902, the building mixes neo-Gothic style with a neo-Renaissance dome reaching 96m (315 ft), significant as the country's millennium was 1896 and the conquest of the kingdom of Hungary was 896. Unfortunately, we were unable to go inside for a guided tour as Hungarian Parliament was in session that day.

Afternoon was at leisure, so my sister and I decided to walk to the historic Great Market Hall with its over 100 market stalls and endless choices of regional products. It was fun to browse what was on sale.

On our walk to and from the Great Market Hall, we admired the architecture in our surroundings. We reminded ourselves to always look up since so many interesting features on buildings are not at eye level.

After an active touring day, nothing could be better than a soak in a thermal. We had passed by Széchenyi Baths, one of the largest spa complexes in Europe and the first thermal bath on the Pest side, however, the Gellért Baths are within walking distance from where we stayed. It is a big building, attached to a hotel. We spent about two hours soaking and relaxing at Gellért thermal baths. Below is Gellért layout to give you an idea of the inside.

We crossed the Széchenyi Bridge or the Chain Bridge which is the first permanent crossing to link Buda and Pest. Designed by William Tierney Clark, an Englishman, the bridge was also one of the largest suspension bridges of its time when it opened in 1849.

In the evening, we walked to a local restaurant and enjoyed dinner before returning to our room to rest for the night. Sleep came easily thanks to the fresh air from our walk, the relaxing thermal baths, dinner with wine, and dessert. 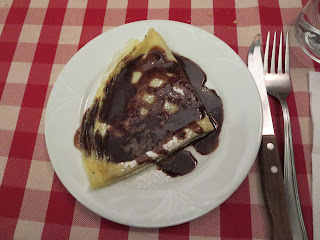 Our stay in Budapest was brief, however, we both felt that we had an excellent introduction to the city and the Hungarian culture. As we wandered through the city, I reminded myself of two facts: Much of Budapest was bombed during World War II, and the Communist regime only ended in 1989. In a relatively short time, the city has made tremendous strides and it seems to be blooming. I'm grateful for the opportunity to visit Budapest with my sister. I'd highly recommend Budapest to other travellers.