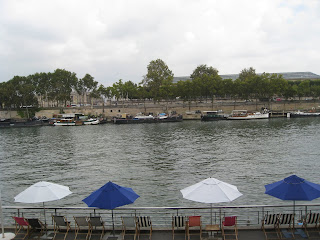 Hello and welcome to another one of my favourite discovery walks in Paris, France! Some of you may have joined me in my previous 5K walk virtually and together we admired the major landmarks in Paris. Today, I'll take you from Notre-Dame cathedral, along the Left Bank of the river Seine, towards the Eiffel Tower.

The river Seine at 777 km long (485 miles) is France's second longest river after the Loire. It flows right through the heart of Paris bordering 10 of the 20 arrondisements. In 1991, UNESCO listed the entire Parisian riverfront, from the Eiffel Tower to the end of the Île St Louis, as a World Heritage Site.

The weather today is cloudy and wind is calm so it's very comfortable for walking and enjoying the scenery along the river. This walk can be done in the morning if you'd like to see the Eiffel Tower and other buildings at daylight, or in the late afternoon to end it in time to see the Eiffel Tower lit up in the evening. It will be a memorable sight! Or, if you're like me, I start out in the morning and keep wandering, with a few short breaks, until the evening.

First thing first, how do you know you're on the Left Bank of the river Seine? My tip is when you face the river flow downstream (or Downriver), the river bank on your left is the Left Bank, and on your right is the Right Bank. You can look at the water flow or a leaf or debris and see which way it's floating. Do not look at the boats as they go upstream as well.

Second, on this riverfront walk, I'll share my photos of the ten bridges along the river Seine, from Pont St Michel to Pont de l'Alma. Pont in French means bridge. I love their unique designs and the history behind each bridge. Needless to say, there are numerous beautiful buildings along the Seine. To keep this post to a reasonable length, I'll focus on the bridge photos and keep the number of other photos to a minimum. Let's start!

1. Pont St Michel - Constructed under the reign of Napoleon III, the present 62 meter-long Pont St Michel opened in 1857. It links Place St Michel on the Left Bank to the Île de la Cité. Note the initial N in the bridge design. We'll head downstream from here.


2. Pont Neuf - Constructed from 1578 to 1607, Pont Neuf is the oldest standing bridge across the Seine in Paris. It is composed of two separate spans, one of five arches joining the Left Bank to the Île de la Cité as shown in my photo below, and another of seven joining the island to the Right Bank. In nice weather, the little island is a wonderful place to hang out, sunbathe, or watch boats.


3. Pont des Arts - This bridge differs from many other bridges in that it is constructed of metal and is entirely pedestrian. It links Place de l'Institut on the left bank to the Louvre Museum on the right bank. The view all around this bridge is stunning. In good weather, people come here to picnic and hang out. Below the bridge, on the left and right quays, you'll see joggers, cyclists, strollers, and sunbathers as part of the pedestrian bank has been designated the 'Paris Beach' in the summer.


4. Pont du Carrousel - Named by king Louis-Phillipe in 1834, this bridge links Quai Voltaire on the left bank to Quai des Tuileries on the right bank, near the Arc de Triomphe du Carrousel in front of the Tuileries.


5. Pont Royal - Constructed from 1685 to 1689, Pont Royal is the third oldest bridge in Paris, after the Pont Neuf and the Pont Marie. It links St Germain area on the left bank, to Jardin du Carrousel on the right bank.


6. Passerelle Léopold-Sédar-Senghor, formerly known as Pont de Solférino, is a footbridge over the river Seine, linking Musée d'Orsay on the left bank and the Jardin des Tuileries on the right bank.


8. Pont Alexandre III looks like the most ornate and extravagant bridge in Paris, connecting the Champs-Elysées quarter with those of the Invalides and the Eiffel Tower. Four gilt-bronze statues watch over the bridge and numerous sculptures feature prominently on the bridge.

9. Pont des Invalides - The current structure was opened in 1855. It is the lowest bridge across the Seine, adorned with sculptures in the Land Victory theme (upriver) and the Maritime Victory (downriver). 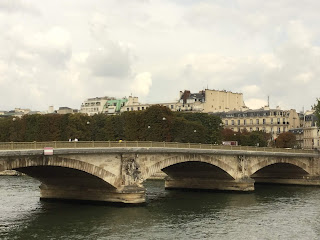 10. Pont de l'Alma - Inaugurated by Napoleon III in 1856, Pont de l'Alma is a road bridge, linking Place de la Resistance on the left bank with Place de l'Alma on the right bank. From this bridge, we get a good view of the Eiffel Tower. 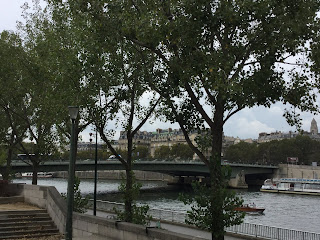 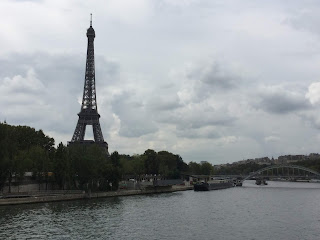 The river Seine is a busy waterway. We can take a guided boat tour or dinner cruise operated by Bateaux Mouches, or enjoy a boat ride on the Batobus (boat shuttle service). Personally, I prefer the batobus as it's quieter and with a pass, passengers can hop on hop off at the eight stations in the heart of Paris.


Voilà, we've just finished our 5K walk along the river Seine in Paris. I love this type of discovery walk which combines fitness, arts, entertainment, social time, and travel along one of the World Heritage Sites. I hope you enjoy the walk as much as I do.

Bridges connect one bank of the river to another, and as we do our virtual walk together, it's natural to have conversations. So let's chat. I'd love to hear your comments.