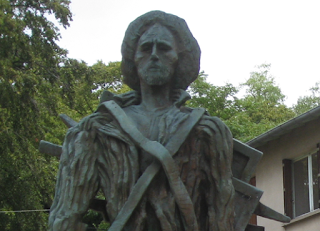 Just over half an hour's drive from Paris and the Orsay Museum, lies the artists' village of Auvers-sur-Oise. Admirers of Vincent van Gogh and other 19th century landscape painters come here from all over the world to be in the very spots depicted in so many well loved paintings. The village is 7 kilometers long (about 4.4 miles). The best way to discover it is on foot.

We made our first stop at the Auvers-sur-Oise Tourist Office to pick up a map and asked a few questions. The weather was cloudy with good chance of rain so we decided to walk the short pedestrian circuit of two hours, as opposed to the longer circuit that would take up to 4.5 hours.

On this walk, we started from Van Gogh Park, discovered places painted by Vincent van Gogh, and ended at the cemetery where the graves of the two van Gogh brothers are located. Below are my photos from Auvers-sur-Oise:

#1) Van Gogh's statue designed by the sculptor Ossip Zadkine in 1961. It is located in Van Gogh Park just outside of the tourist office.


#2 and #3) Auvers-sur-Oise Town Hall which was depicted in van Gogh's La Mairie d'Auvers painting. The town hall is across the street from the inn, Auberge Ravoux, where van Gogh spent his last seventy days.

#4) Van Gogh's residence at Auberge Ravoux, 52 Général De Gaulle Street, where Van Gogh's room has been left untouched, giving visitors a good idea of the artist's living conditions at the time. There is nothing to see in his room other than a small skylight and an old bistro chair. During his stay at Auberge Ravoux, Vincent van Gogh painted seventy eight paintings. Among these were a dozen or so portraits, two of which depict Adeline Ravoux, the thirteen-year old eldest daughter of the innkeepers Ravoux.


#5 and #6) Walking towards the church Église d'Auvers, we passed by the Daubigny Museum and the steps where Vincent van Gogh painted L'escalier d'Auvers.

#7 to #9) The church, Église d'Auvers, in the Romano-Gothic style surrounded by a bell tower, is characteristic of the region. Vincent van Gogh painted it on June 3 and 4, 1890. It is now a master piece of the Orsay Museum. We were able to go inside the church and took photos. The church exterior was under restoration and had some scaffolding behind the bell tower.


#10 to #12) The houses in Auvers-sur-Oise looked pretty with their painted windows and doors, or greenery and flowers along the walls. Part of the walk is uphill, providing a good view of the village.


#13) The graves of Vincent van Gogh and his brother Théodore in the Auvers Cemetery: Vincent van Gogh arrived in Auvers on May 20, 1890 and died on July 29. He was 37. His younger brother, confidant, and primary supporter, Théodore, died of syphilis six months later at age 33.


The weather forecast was right. As we approached the cemetery, it started raining, first lightly then it became heavier. We were pleased to complete the short pedestrian circuit and saw several key landmarks in Auvers-sur-Oise on this visit.

Are you a fan of Vincent van Gogh's art? Which of his paintings do you like most? Please share.