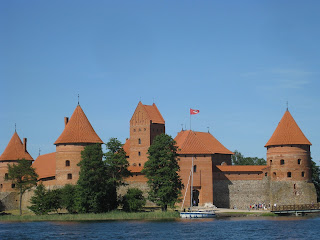 From Riga, I headed south by bus towards Vilnius, Lithuania's capital. The distance is about 280 km (175 miles). Similar to the ride from Tallinn to Riga, the road condition to Vilnius is very good. Again there is no passport control at the border since Lithuania is also in the European Union. The weather continued to be superb, sunny and warm, with clear blue skies. Lithuania has about sixty sunny days in a year and I certainly got a few of those sixty days! The countryside was picturesque with lush green forests and occasional bright yellow canola or rapeseed fields. I also saw a number of big storks' nests along the way.

Since Lithuania is not a well-known travel destination yet, I wrote a few quick facts before sharing some of my snaps of Vilnius and Trakai Castle in this post.

Vilnius Old Town - Dated back to the 13th century, Vilnius Old Town has an impressive complex of Gothic, Renaissance, Baroque, and classical buildings, as well as its medieval layout and natural settings. It is an easy walk from the Gate of Dawn at one end to Cathedral Square at the other end of the Old Town. I enjoyed the historic architecture, and the many shops at the main square and in the charming lanes. High quality linen and amber are abundant and at reasonable prices in Vilnius.

Vilnius Historic Buildings - Vilnius is a city of churches. Every block has a few huge churches, each with a distinct appearance, and elements of internal and external finishes. The majority of Lithuanians are Roman Catholics. Pope John Paul II visited Lithuania in September 1993. Pope Francis will make a state visit to Lithuania on September 22-23 this year.

Vilnius Gate of Dawn Chapel, built between 1503 and 1522, is one of the most visited shrines. The painting of the Blessed Virgin Mary, Mother of Mercy, was painted in the 17th century.

Vilnius Cathedral original temple dates back between the 13th or 15th century. In 1922, the Cathedral was granted the title of 'Basilica' by Pope Pius XI. The astonishingly beautiful Chapel of St. Casimir is at the end, in the right corner of the Cathedral Basilica.


Gediminas Tower is the remaining part of the Upper Castle in Vilnius. It's an important historic symbol of Vilnius and Lithuania.


Vilnius University, one of the oldest universities in Central Europe, was founded in the 16th century. Its main Library was built in 1570.


Vilnius Church of St. Peter and St. Paul interior has about 2,000 stucco figures in Baroque design. This is one church not to miss in Vilnius. Click to enlarge the photos to see the amazing details.


Vilnius Church of St. Anne is a masterpiece of the late Gothic period. Next to the church, the bell tower was built in the 19th century.

Trakai is about 28 km (18 miles) from Vilnius. Its main attraction is the red brick Trakai Castle on Galve Lake, regally standing on an island by itself completely surrounded by water. This historic palace was built by Lithuanian Dukes and once served as their residence. I took a guided tour to visit Trakai Castle and its lovely grounds. 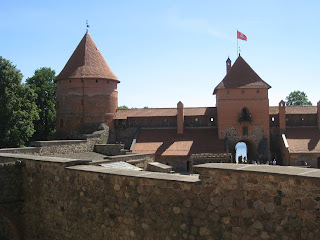 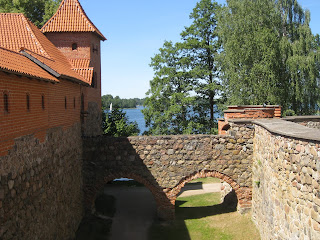 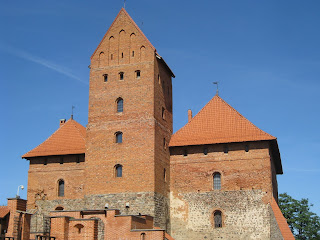 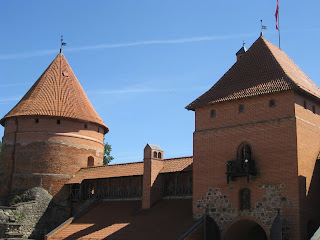 LITHUANIAN CUISINE - During my stay in Lithuania, I tried a few local traditional dishes and remembered to take some photos before devouring them. 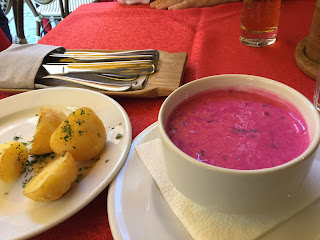 In conclusion, my visits to Vilnius and Trakai Castle were wonderful. I now have seen the three Baltic countries and their capitals. By traveling from north to south from Estonia, to Latvia, to Lithuania, I understood the historic events and cultural connections among the three countries more. I'd recommend the same approach to other travelers to the region.

Coming from Toronto, a city of about 2.5 million people, I found the three Baltic capitals easy to navigate at a relaxing pace. Walking is the best way to explore the historic centres of these cities. Be prepared to become a spontaneous wanderer because the Old Town layouts and what awaits at each corner are not to be missed.

MY NEXT STOP: Warsaw, Poland.

How familiar are you with Vilnius or Trakai or Lithuania? Would any of the sights that I mentioned be of interest to you? I'd love to hear your thoughts.
Posted by Natalie at 16:30