Bonjour mes amis! One of the items on my summer fun list as written here is to meet up with friends in Quebec City in July. For this family vacation, we decided to fly to Quebec City and stay close to Old Town Quebec where most of the attractions are. We've been to Quebec City before, however, some of our friends have not, so this is an opportunity for us to re-visit some of our favourite sights in this beautiful city and create new memories with friends.

We had a record-breaking heat wave the entire week that we were there. The daily high temperatures were about 35 Celsius (95F). With humidity it felt like 45 Celsius (113F) but we kept cool and carried on. We did most of our sightseeing either early in the morning or later in the afternoon into evening, and stayed indoor during the day. Coincidentally, Canada's 151st birthday and the Festival d'Été de Québec (FEQ) were on in the same week so we enjoyed great celebrations and music as well.

HOW TO GET THERE:

Quebec City or Ville de Québec is the capital city of the Canadian province of Quebec, on the Atlantic side of Canada. It's about 800 km (450 miles) north east of Toronto.  You can get there by planes, trains, automobiles, or boats as the city is right by the St Lawrence River. The airport code is YQB.

WHAT I LOVE ABOUT QUEBEC CITY:
Without further ado, please see some of my photos below. Click on the images to enlarge them.

HISTORIC LANDMARKS: Too many historic landmarks to list here, however, every time I go to Old Town Quebec, I always visit Le Château Frontenac hotel (dated back to 1893), Dufferin Terrace, the Plains of Abraham, the Citadel, and the various gates such as Porte Saint-Jean, Porte Kent, Porte Saint-Louis that are part of the fortifications.


FESTIVAL D'ÉTÉ de QUÉBEC (FEQ): Quebec City summer festival is an annual 11-day music festival. This year, it's on from July 5 to 15 with a great line up of performers at various stages in the city. We were able to join in some of the performances and let me tell you, this city knows how to celebrate! 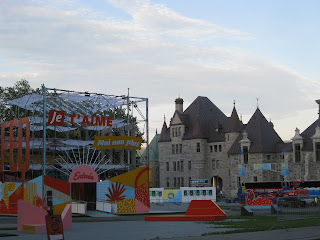 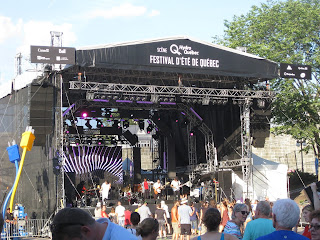 All in all, I've again had a wonderful time in Quebec City and another amazing trip this year. I'm now back at home enjoying summer in my city, and plotting my next adventure.

I'd love to hear your thoughts about Quebec City.